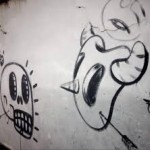 Freelance event organiser, film programmer and PhD student (University of Salford). I have been researching cultural festivals as a mode of engagement and education, looking in particular at festivals presented by universities.

I have worked as film programmer, volunteer co-ordinator, venues manager, print co-ordinatrix and whatever else has needed doing at Leeds and Bradford International Film Festivals. I organise pop-up screenings in Leeds, I have contributed events to Scalarama's nationwide celebration of cinema and I volunteer at the Hyde Park Picture House in Leeds. Usually this involves selling popcorn but sometimes I do bits of programming and host Q&As with guests.

I'm interested in film, history, cultural studies, the politics of the cultural economy and non-hierarchical models of organising.

You can find out about the films I'm screening on twitter: @filmfringe