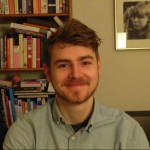 As the Social Justice Film Night Coordinator at the Shrub Cooperative I screen feature and documentary films that facilitate discussions on social justice and environmentalism. Promoted through social media, special events and word-of-mouth, the Shrub Film Nights have become a great success at the Shrub and contributed to the growing paid membership of the cooperative.

Duties include: Acting compère of the film nights, hosting panel discussions and facilitating the screenings. Researching and successfully applying for arts and social enterprise funding. Collaborating with local businesses, education institutions and social enterprises to hold larger screenings in 2016. Our most recent screening at the Edinburgh Centre for Carbon Innovation sold out and the room filled to capacity with over 100