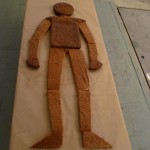 Rebecca Garrett is an artist filmmaker. She has been exhibiting single channel experimental videos, mixed media and performative interventions, site specific installations, and film and video installations in numerous venues in Canada and abroad for 30 years. Her documentary work with First Nations and anti-poverty organizations insists on facilitating a collective voice in communities under siege. Her approach honors the radical political material of peoples’ lives and context by prioritizing the dignity of all too often ignored bodies and voices, layering the complexity of specific situations with more broadly based questions and analysis. Garrett has taught at York University, the University of Toronto, and the Ontario College of Art and Design.

Liza Kim Jackson is a PhD candidate in Environmental Studies at York University who researches the role of (crip) social praxis arts in contesting gentrification and it impacts on Othered-economies of low-income and marginalized socialities and spaces in Toronto.